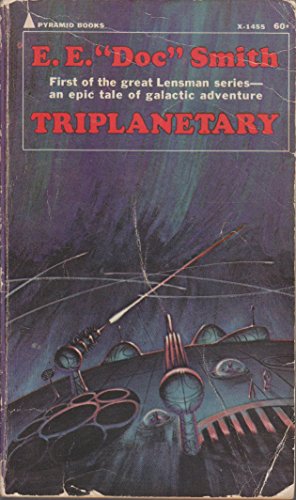 Description:
The novel covers several episodes in an eons-long human breeding project by the super-intelligences of the Arisians. This alien race is breeding two genetic lines to become the ultimate weapon in Arisia's cosmic war with their arch-enemies, the Eddorians.

The Colors of Space
by Marion Zimmer Bradley - ManyBooks
The Lhari, the first space faring race, have made contact with humans and established spaceports. There is just one problem; they are keeping the secrets of their space drive to themselves. Humans are resentful and feel like second class citizens.
(8308 views)

Deep Space Dead
by Edward Chilvers - Smashwords
Many thousands of years into the future the human race reigns supreme over the galaxy, its colonial starships travelling vast distances to settle new worlds in the furthest star systems. A group of space colonists are trapped on a distant planet ...
(4724 views)

Uranium Fist
by Mark Cantrell - ManyBooks
On the colony world of Greyermede, the populace had grown discontented with rule from an aloof and distant Terran overlord. So began the first stirrings that would explode into the most ancient of human dreams. Great science fiction novel.
(12745 views)