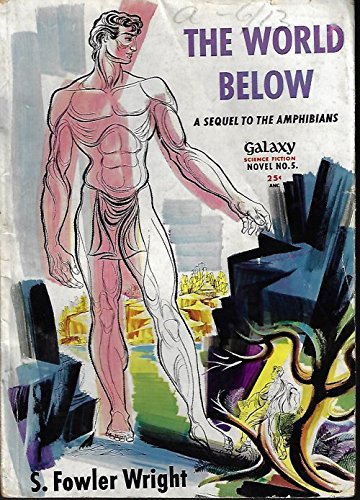 The World Below
by S. Fowler Wright

Description:
When George is transported to a far-future Earth, he finds himself caught between two very different species of humanity -- the Amphibians, dwellers of the deeps, and the giant Dwellers, rulers of the large island that constitutes the major land mass. With the help of one of the Amphibians, George goes looking for any sign of two earlier time-travelers, neither of which has returned. His adventures among the strange flora and fauna of this brave new world constitute one of Wright's most original and compelling imaginative fictions.

The Last Spaceship
by Murray Leinster - The Galaxy Publishing Corporation
Kim Rendall will not yield to the tyranny of the power-madrulers of Alphin III. Branded an outlaw, he is in danger of psychological torture worse than death from the Disiplinary Circuit. His one hope lies in the Starshine, an outmoded spaceship.
(4183 views)

Well of the Worlds
by Lewis Padgett - Gerard Arthus
Clifford Sawyer, investigating ghosts in a mine, finds ancient beings from another world -- and gets swept up in a titanic struggle between for control of a parallel dimension. This novel was originally published in 'Startling Stories', in 1952.
(3869 views)

Chessboard Planet
by Lewis Padgett - The Galaxy Publishing Corporation
It concerns Robert Cameron, trained in applied psychology, who finds himself being driven insane by a strange, unfathomable force. As an experienced psychometrician he fights the terrifying hallucinations. He knows his job is vital ...
(7742 views)

Empire
by Clifford D. Simak - Gerard Arthus
Mankind is united under the rule of a single corporation and has begun to explore and settle the stars. The corporation maintains its monopoly on energy. But that's about to change and the corporation will do anything to hold onto its power ...
(3692 views)