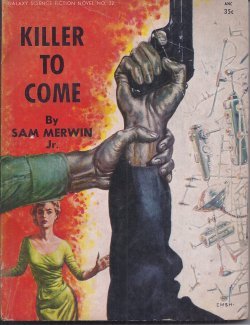 Description:
Due to his research into the lives of geniuses, Dr Julius Conrad of the Wellington Institute for the Study of the Humanities has developed a radical hypothesis: Namely, that the work of most geniuses, past and present, has been directed by minds from a ruthless future which take possession of either the unstable geniuses themselves or else of unstable people who are in a position to change the course of the geniuses' work.

Three Go Back
by J. Leslie Mitchell - The Galaxy Publishing Corporation
When their transatlantic airship is destroyed, three survivors find themselves in a lost world 25,000 years in the past, a world peopled by Neanderthals and Cro-Magnons. Claire Stranlay must somehow survive and does so in the only way she knows how.
(3771 views)

The Mating Cry
by A. E. van Vogt - The Galaxy Publishing Corporation
He was still in the coffin, but a cool draft of fresh air was blowing across his face. In the blackness, Tannahill put out his hand. He touched cushiony satin, but after a minute the air was wafting as coolly as ever into his nostrils...
(3206 views)

The Rat Race
by Jay Franklin - Crowell-Collier Pub.
Lieutenant Jacklin is blown up in a thorium bomb explosion while on the battleship Alaska. He awakens in the body of Winnie Tompkins who had perpetrated the explosion. As Tompkins, he learns of a plot by German agents to poison Franklin D. Roosevelt.
(3971 views)

Pebble in the Sky
by Isaac Asimov - The Galaxy Publishing Corporation
One moment Joseph Schwartz is a happily retired tailor in Chicago, 1949. The next he's a helpless stranger on Earth during the heyday of the first Galactic Empire. Earth, as he soon learns, is a backwater, just a pebble in the sky, despised by all...
(3983 views)