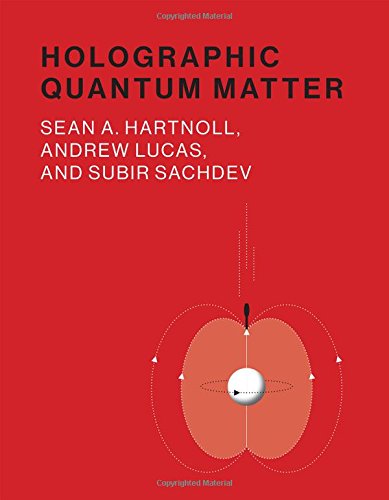 Description:
We present a review of theories of states of quantum matter without quasiparticle excitations. Solvable examples of such states are provided through a holographic duality with gravitational theories in an emergent spatial dimension. We review the duality between gravitational backgrounds and the various states of quantum matter which live on the boundary.

Introduction to the physics of hot and dense hadronic matter
by Bengt Friman & Jörn Knoll - GSI
Content: Kinematics; Scattering theory; Thermodynamics of strongly interacting matter; Transport in theory and practice; Chiral symmetry in vacuum and at finite density; The properties of hadrons in dense / hot matter and possible signatures.
(7296 views)

What's (the) Matter?, A Show on Elementary Particle Physics
by Herbi K. Dreiner, et al. - arXiv
We present the screenplay of a physics show on particle physics, by the Physikshow of Bonn University. The show is addressed at non-physicists aged 14+ and communicates basic concepts of particle physics including the discovery of the Higgs boson.
(6614 views)

Lectures on the Theory of the Weak Interaction
by Michael E. Peskin - arXiv.org
The topics discussed: 1) the experimental basis of the V-A structure of the weak interaction; 2) precision electroweak measurements at the Z resonance; 3) the Goldstone Boson Equivalence Theorem; 4) the Standard Model theory of the Higgs boson; etc.
(4103 views)

Neutrino Physics Overview
by J. W. F. Valle - arXiv
Seesaw-type and low-scale models of neutrino masses are reviewed, along with the corresponding structure of the lepton mixing matrix. The status of neutrino oscillation parameters as of June 2006 is given, including recent fluxes.
(8263 views)