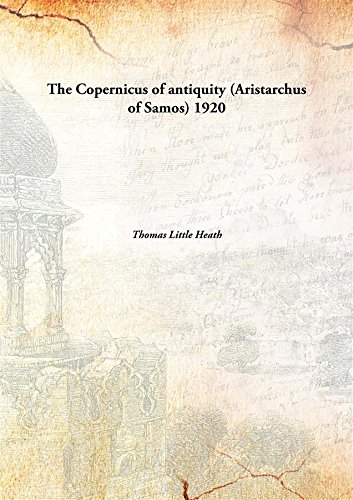 The Copernicus of Antiquity: Aristarchus of Samos
by Thomas Little Heath

Description:
The crowning achievement of anticipating the hypothesis of Copernicus belongs to Aristarchus of Samos alone; but to see it in its proper setting it is necessary to have followed in the footsteps of the earlier pioneers who, by one bold speculation after another, brought the solution of the problem nearer, though no one before Aristarchus actually hit upon the truth.

Robert Fulton: Engineer and Artist
by H. W. Dickinson - Bell & Cockburn
The author brings to light a mass of documentary matter relative to Robert Fulton, and presents the facts about him in an entirely new light. The interesting but little known episode of his career as an artist is for the first time fully dealt with.
(10084 views)

Zeppelin: The Story of a Great Achievement
by Harry Vissering
This book recounts the life and work of Count Zeppelin. In addition to descriptive text, the book includes nearly 100 rare photographs and line drawings detailing the history, construction and operation of these remarkable craft.
(13541 views)

The Life of Sir Isaac Newton
by David Brewster - Harper & Brothers
Sir Isaac Newton has been placed at the head of those great men who have been the ornaments of their species. However imposing be the attributes with which time has invested the sages of antiquity, the brightness of their fame has been eclipsed...
(8092 views)

Michael Faraday
by J. H. Gladstone - Macmillan
Impressions of Michael Faraday's life, his character, and his method of working. This little book designed for those of his fellow-countrymen who venerate his noble character without being able to follow his scientific researches.
(5618 views)