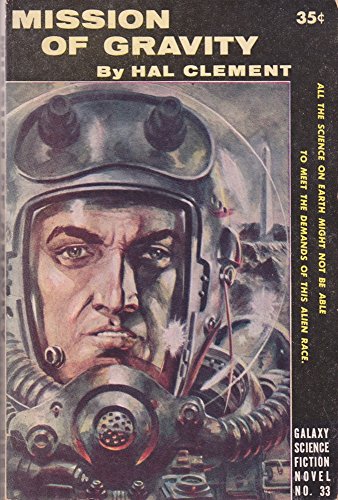 Mission of Gravity
by Hal Clement

Description:
An exciting hard science quest on a thoroughly alien world. Mesklin is a vast, inhospitable, disc-shaped planet, so cold that its oceans are liquid methane and its snows are frozen ammonia. It is a world spinning dizzyingly, a world where gravity can be a crushing 700 times greater than Earth's, a world too hostile for human explorers.

Accelerando
by Charles Stross - Ace Hardcover
The Macz family has struggled for three generations to cope with the technological achievements that have rendered humans near obsolete. Then, something starts to annihilate all biological lifeforms. A novel destined to change the face of the genre.
(14714 views)

Phantom Duel
by Ford McCormack - Infinity Science Fiction
Faria, as it was called in the Vega system, was about the size of Earth and its atmosphere was tolerable to humans -- there the resemblance all but ended. For its weather was insufferably hot and its topography fantastically tortuous ...
(1309 views)

The Stargate Black Hole
by V Bertolaccini - Smashwords
A secret agent probes scientists creating a stargate after time warps and black holes are made in particle accelerators in space, and enters it and hurtles through a gateway, and a starship crew is attacked by a devil-like presence in deep space ...
(5791 views)

Ye of Little Faith
by Roger Phillips Graham - Project Gutenberg
The disappearance of John Henderson was most spectacular. It occurred while he was at the blackboard working an example in integration for his ten o'clock class. The incompleted problem remained on the board while the police worked on the case.
(7375 views)