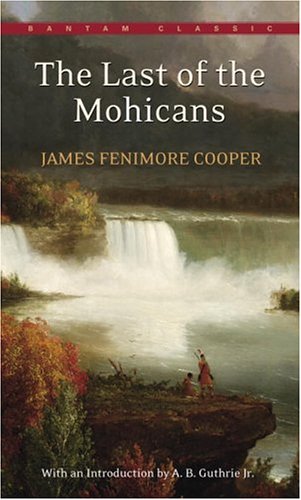 The Last of the Mohicans
by James Fenimore Cooper

Description:
The wild rush of action in this classic frontier adventure story has made The Last of the Mohicans the most popular of James Fenimore Cooper’s Leatherstocking Tales. Deep in the forests of upper New York State, the brave woodsman Hawkeye (Natty Bumppo) and his loyal Mohican friends Chingachgook and Uncas become embroiled in the bloody battles of the French and Indian War. The abduction of the beautiful Munro sisters by hostile savages, the treachery of the renegade brave Magua, the ambush of innocent settlers, and the thrilling events that lead to the final tragic confrontation between rival war parties create an unforgettable, spine-tingling picture of life on the frontier. And as the idyllic wilderness gives way to the forces of civilization, the novel presents a moving portrayal of a vanishing race and the end of its way of life in the great American forests.

Bucky O'Connor: A Tale of the Unfenced Border
by William MacLeod Raine - ManyBooks
This is the best of many wonderful stories written by Raine. Every chapter teems with wholesome, stirring adventures, replete with the dashing spirit of the border, told with dramatic dash and absorbing fascination of style and plot.
(7931 views)

Arizona Argonauts
by H. Bedford-Jones - Doubleday, Page & Co
Piute Tompkins, sole owner of what used to be the Oasis Saloon but was now the Two Palms House, let the front feet of his chair fall to the porch floor and deftly shot a stream of tobacco juice at an unfortunate lizard basking in the sunny sand ...
(3233 views)

The Mark of Zorro
by Johnston McCulley - Grosset & Dunlap
Novel narrates the adventures of a young man of the Californian aristocracy called Don Diego De la Vega, a young nobleman, son of a Spanish landowner, who lived in the then town of Los Angeles, in old Spanish California of the early 1800s.
(1086 views)

The Riverman
by Stewart Edward White - ManyBooks
This novel is a rugged adventure from a time when men had to work for a living. The story of a man's fight against a river and of a struggle between honesty and grit on the one side, and dishonesty and shrewdness on the other.
(5909 views)