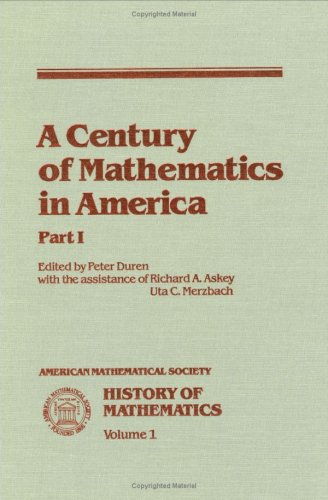 A Century of Mathematics in America
by Peter Duren, Richard A. Askey

History of Modern Mathematics
by David Eugene Smith - Columbia University
This is an outline of the prominent movements in mathematics, presenting a few of the leading names, and calling attention to some of the bibliography of the subject. In these pages the term Mathematics will be limited to the domain of pure science.
(15759 views)

A Brief History of Mathematics
by Karl Fink - Open Court Publishing Company
The book is intended to give students of mathematics an historical survey of the elementary parts of this science and to furnish the teacher of the elements opportunity to review connectedly points for the most part long familiar to him.
(7280 views)

A Short History of Greek Mathematics
by James Gow - Cambridge University Press
Students and Greek scholars will encounter a chronicle of the development of mathematics, including the decimal scale; Egyptian and Greek arithmetic; theory of numbers; Greek geometry; Egyptian geometry; Euclid, Archimedes, and their successors ...
(8669 views)