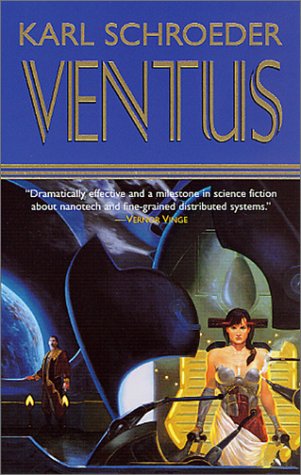 Description:
After terrifying and titanic struggles, a godlike artificial intelligence gone rogue has finally been destroyed. But not before it scattered seeds of itself throughout the galaxy. Ventus is an epic journey across a fascinating planet with two big mysteries -- why have the Winds fallen silent? And is Armiger, or Jordan, carrying a Resurrection Seed?

The Life, Death and Life of Amelia Hollow
by Edward James Bowman - Smashwords
In the year 2808 AD, eighteen year-old Amelia gets accepted into Starside Academy: the top United Systems of Mel naval academy. She is the first human to ever be accepted into such an elite academy as the human race is looked down upon by the USM.
(5845 views)

Pioneers of the Stars
by Cody Sherer - Smashwords
This fun-filled and action oriented Science Fiction adventure introduces you to the world of George Jackson. On the run from the Alliance, George does what he can to hide, but his cover is ultimately blown by Alliance Bounty Hunters...
(6081 views)

The Test Colony
by Winston K. Marks - If Worlds of Science Fiction
As official recorder, I was trying to think of words suitable to capture the magnificence, the sheer loveliness of the planet which would be our home for at least four years, perhaps forever. Benson did his best to keep his colony from going native.
(3671 views)