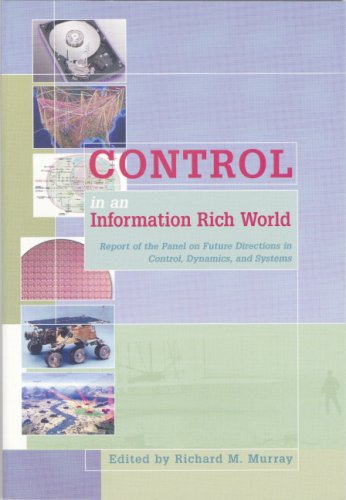 Control in an Information Rich World
by Richard M. Murray

Description:
This report spells out some of the prospects for control in the current and future technological environment; describes the role the field will play in military, commercial, and scientific applications over the next decade; and recommends actions required to enable new breakthroughs in engineering and technology through the application of control research.

Applications of Nonlinear Control
by Meral Altinay - InTech
A trend of investigation of Nonlinear Control Systems has been present over the last few decades. This book includes topics such as Feedback Linearization, Lyapunov Based Control, Adaptive Control, Optimal Control and Robust Control.
(10837 views)

Feedback Control Theory
by John Doyle, Bruce Francis, Allen Tannenbaum
The book presents a theory of feedback control systems. It captures the essential issues, can be applied to a wide range of practical problems, and is as simple as possible. Addressed to students who have had a course in signals and systems.
(14780 views)

Lectures on Stochastic Control and Nonlinear Filtering
by M. H. A. Davis - Tata Institute of Fundamental Research
There are actually two separate series of lectures, on controlled stochastic jump processes and nonlinear filtering respectively. They are united however, by the common philosophy of treating Markov processes by methods of stochastic calculus.
(8241 views)