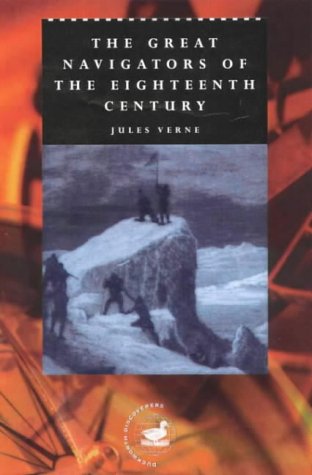 The Great Navigators of the Eighteenth Century
by Jules Verne

Description:
In this this work of non-fiction Verne recounts the voyages of various European navigators, such as Alexander Selkirk (Robinson Crusoe), Captain Cook and de Bougainville to all parts of the globe. Verne clearly researched his subject in order to assemble detailed accounts of the explorers' climactic, navigational and health hazards, and their discoveries of flora and fauna. The manners, customs and costumes of native inhabitants are elaborately described. Illustrated with maps and engravings of navigators and natives, locations and animals, the book provides a wealth of historical information as well conveying the sense of adventure enjoyed by the explorers.

Across Asia on a Bicycle
by Thomas Gaskell Allen, William Lewis Sachtleben - The Century Co.
Two Washington University graduates sail to Liverpool and begin a 15,000-mile bicycle journey to Peking. The account begins in Asia Minor as the students cycle on through Persia and Turkestan, with detours to Merv, Bokhara, and Samarkand.
(15933 views)

A Thousand Miles up the Nile
by Amelia B. Edwards - A. L. Burt Company
Sailing the Nile and armed with sketch-book and measuring tape, Amelia Edwards carefully recorded all she saw of the temples and monuments, and provided in A Thousand Miles Up The Nile the first general archaeological survey of Egypt's ruins.
(8668 views)

Man-Eaters of Kumaon
by Jim Corbett - Oxford University Press
Jim Corbett killed a leopard at the age of nine and achieved a legendary reputation as a hunter. Here is the best of his books, which offers fascinating tales of pursuing tigers in the Indian Himalayas during the beginning of 20th century.
(28543 views)

The Voyages of Captain Scott
by Charles Turley - Dodd, Mead and Company
Scott led an expedition to the Antarctic. They reached the South Pole in 1912, to find that they had been preceded by Roald Amundsen in a race for the Pole. On their return Scott and his comrades perished because of extreme cold and exhaustion.
(9850 views)