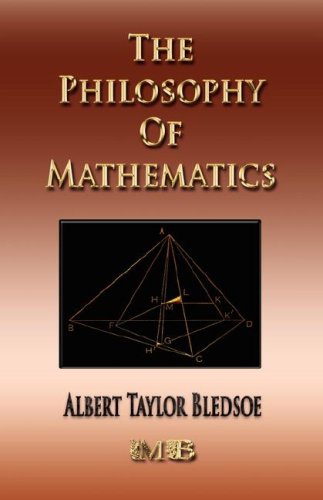 The Philosophy of Mathematics
by Albert Taylor Bledsoe

Aesthetics for the Working Mathematician
by Jonathan M. Borwein - DocServer
Most research mathematicians neither think deeply about nor are terribly concerned about either pedagogy or the philosophy of mathematics. Nonetheless, as I hope to indicate, aesthetic notions have always permeated (pure and applied) mathematics.
(11327 views)

Lectures on the Philosophy of Mathematics
by James Byrnie Shaw - Open Court Pub. Co
The author delivered a course of lectures to widen the field in the way of making it intelligible to all students of fair mathematical knowledge, which could be accomplished best by considering mathematics constantly in its historical development.
(4162 views)

Introduction to Mathematical Philosophy
by Bertrand Russell - University of Massachusetts Amherst
A very accessible mathematical classic. It sets forth in elementary form the logical definition of number, the analysis of the notion of order, the modern doctrine of the infinite, and the theory of descriptions and classes as symbolic fictions.
(13202 views)