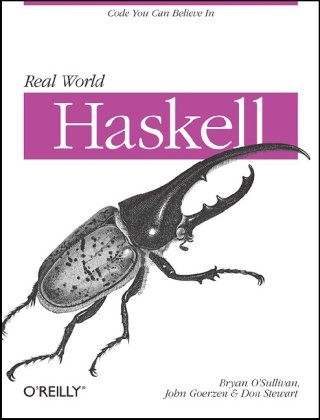 Description:
Real World Haskell takes you through the basics of functional programming at a brisk pace, and then helps you increase your understanding of Haskell in real-world issues like I/O, performance, dealing with data, concurrency, and more as you move through each chapter. With this book, you will: Understand the differences between procedural and functional programming; Learn the features of Haskell, and how to use it to develop useful programs; Interact with filesystems, databases, and network services; Write solid code with automated tests, code coverage, and error handling; Harness the power of multicore systems via concurrent and parallel programming.

Learn You a Haskell for Great Good!
by Miran Lipovaca - LearnYouaHaskell.com
This is an attempt at adding another useful resource for learning Haskell. This tutorial is aimed at people who have experience in imperative programming languages (C, C++, Java, Python) but haven't programmed in a functional language before.
(16050 views)

Learn Haskell Fast and Hard
by Yann Esposito - yannesposito.com
A very short and dense tutorial for learning Haskell. This text will certainly be hard to follow. This is on purpose. There is no shortcut to learning Haskell. It is hard and challenging. It is because it is hard that Haskell is interesting.
(6794 views)

Natural Language Processing for the Working Programmer
by Daniël de Kok, Harm Brouwer
We will go into many of the techniques that so-called computational linguists use to analyze the structure of human language, and transform it into a form that computers work with. We chose Haskell as the main programming language for this book.
(15185 views)