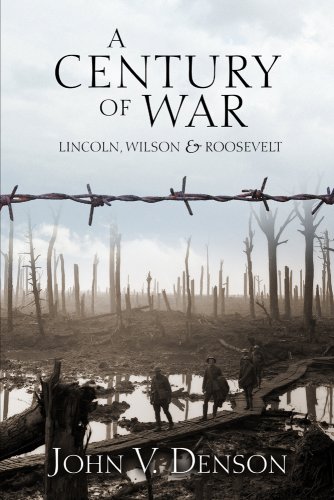 A Century of War
by John V. Denson

Description:
John Denson, in a book that covers the history of America's large wars from 1860 through the Cold War, describes the twentieth century as the bloodiest in all history not coincidentally a century of statism. Denson recounts how the wars that destroyed American liberty came about through a series of deceitful political ploys. He provides a close examination of the rise of executive dictatorship, and demonstrates how far from the founders' vision of government we have come. It explains how world peace can only come through the practice of free trade and free markets, and why large government can only create conflict both domestic and international.

The American Story
by Garet Garrett - Henry Regnery Company
The real American story, from its beginning on the empty stage of a New World until now, is entirely improbable. Every attempt to account for it rationally leaves you with a feeling that something important has been left out.
(12484 views)

The Dropping of the Atomic Bomb: Truman's True Intentions
by Dominick Abel Severance - Christendom College
Truman’s true intention was to use the destruction of a Japanese city to shock the world and manipulate the horror and destructive power of the bomb to create fear in the international community to ensure the security of American political interests.
(15970 views)

Over the Edge: Remapping the American West
by V. J. Matsumoto, B. Allmendinger - University of California Press
From the Gold Rush to rush hour, the history of the American West is fraught with diverse, subversive, and at times downright eccentric elements. This provocative volume challenges traditional readings of western history and literature.
(12917 views)