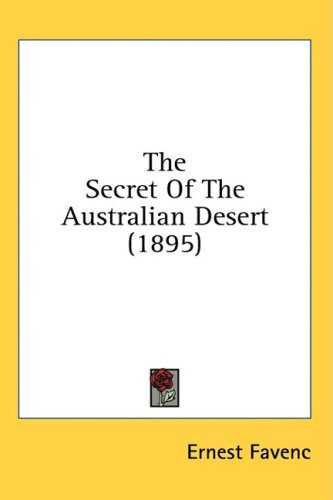 The Secret Of The Australian Desert
by Ernest Favenc

Description:
Although the interior of the continent of Australia is singularly deficient in the more picturesque elements of romance, it was, for nearly two-thirds of a century, a most attractive lure to men of adventurous character. Oxley, Sturt, Mitchell, Kennedy, and Stuart have left deathless names on the roll of Australian explorers, but the unknown fate of Ludwig Leichhardt has always centered most of the romance of story about his memory. This great mystery of Australian exploration is the groundwork of the story. The descriptions of the physical features of the country are faithful records from personal experience.

Saglek
by John Michaelson - Smashwords
In 1969 Lt. Michael Robinson was assigned to Saglek Air Force Station, an arctic outpost perched above the waters of Atlantic. Subjected to extraordinarily severe conditions he began a personal journey of revelation. Based on a true story.
(6291 views)

Robin Hood
by Paul Creswick - ManyBooks
This is the classic story of the life and adventures of Robin Hood, who lived as an outlaw in Sherwood Forest dedicated to fighting tyranny. Robin Hood, champion of the poor and oppressed, stands against the cruel power of Prince John ...
(8129 views)

A Yankee Flier with the R.A.F.
by Al Avery - Grosset & Dunlap
Here he was, really a fugitive from his distant homeland, standing in the Royal Air Force mess while outside the closely curtained windows all of London lay under an inky blackout, listening and waiting for the whine of the bombers.
(7470 views)

The Strength of the Pines
by Edison Marshall - Little, Brown, and Company
Before the gray of dawn came over the land Bruce Duncan had started westward. He had no self-amazement at the lightning decision. He was only strangely and deeply exultant. The reasons why went too deep within him to be easily seen...
(7067 views)