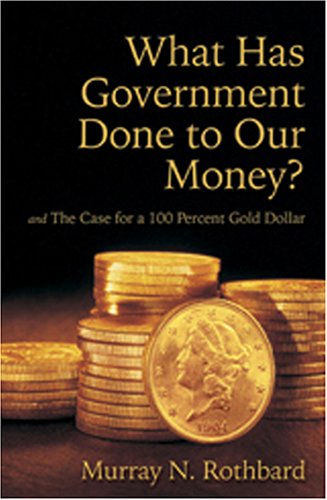 What Has Government Done to Our Money?
by Murray N. Rothbard

Description:
Rothbard's most famous monetary essay has influenced two generations of economists, investors, and business professionals. After presenting the basics of money and banking theory, the author traces the decline of the dollar from the 18th century to the present, and provides lucid critiques of central banking, New Deal monetary policy, Nixonian fiat money, and fixed exchange rates. He also provides a blueprint for a return to a 100 percent reserve gold standard.

Silver Money
by Dickson H. Leavens - The Principia Press
The silver question is an important and controversial one. The purpose of this book is to present in one volume the background and principal developments in the use of silver as money since the beginning of the nineteenth century.
(8408 views)

The Case for Gold
by Ron Paul - Ludwig von Mises Institute
The book covers the history of gold in the US, explains that its breakdown was caused by governments, and explains the merit of having sound money: prices reflect market realities, government stays in check, and the people retain their freedom.
(14531 views)