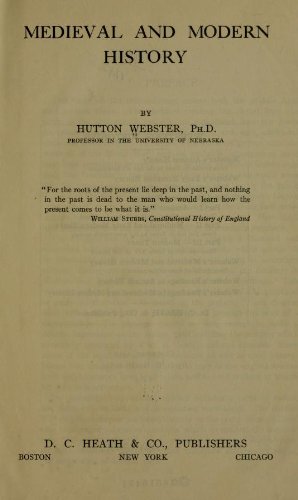 Description:
This textbook, as the title indicates, covers both the Middle Ages and modern times. The entire work has been written since the outbreak of the World War I, and its probable consequences have been kept constantly in mind.

World History
by Hutton Webster - D. C. Heath
This textbook covers the entire history, together with prehistoric times; it presents a survey of human progress, rather than a chronological outline it is intended for the students who do not take more than one year of history in the high school.
(17340 views)

Hitler's Shadow: Nazi War Criminals, U.S. Intelligence, and the Cold War
by Richard Breitman, Norman J.W. Goda - The National Archives
This book is based on newly declassified and analyzed government documents. It documents how Western intelligence agencies declined to prosecute war criminals -- often men responsible for the deaths of thousands of Jews and others ...
(5452 views)

A Short History of Christianity
by J. M. Robertson - Watts & Co.
Robertson was an advocate of the Jesus-Myth theory, and he argued against the historicity of Jesus. According to Robertson, the character of Jesus in the New Testament developed from a Jewish cult of Joshua, whom he identifies as a solar deity.
(8006 views)

Ten Girls from History
by Kate Dickinson Sweetser - Duffield & Company
About the lives of girls who achieved some noteworthy success during youth. More attention is paid to accuracy of fact than to the interesting romances, in the hope that this volume may be used as an introduction to the more detailed documents.
(11507 views)