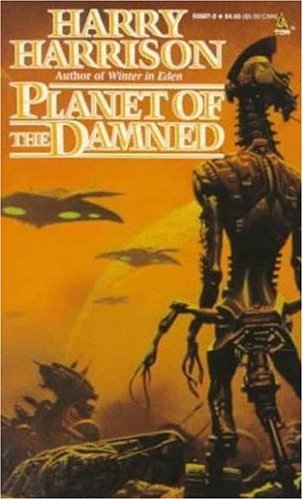 Planet of the Damned
by Harry Harrison

Description:
"Planet of the Damned" is classic science fiction and a coming of age story. The hero, Brion, is a young man given his first opportunity to prove his worthiness by trying to save Dis, a horrible planet that seems hell bent on self destruction. Harrison's imagination fills the page with sweeping scenery, even though the book checks in at a relatively snappy 160 or so pages. It is proof that epic science fiction does not need to go one for many volumes ala L. Ron Hubbard.

Uranium Fist
by Mark Cantrell - ManyBooks
On the colony world of Greyermede, the populace had grown discontented with rule from an aloof and distant Terran overlord. So began the first stirrings that would explode into the most ancient of human dreams. Great science fiction novel.
(12860 views)

The Life, Death and Life of Amelia Hollow
by Edward James Bowman - Smashwords
In the year 2808 AD, eighteen year-old Amelia gets accepted into Starside Academy: the top United Systems of Mel naval academy. She is the first human to ever be accepted into such an elite academy as the human race is looked down upon by the USM.
(5524 views)

Ventus
by Karl Schroeder - Tor Science Fiction
A terrifying artificial intelligence scattered seeds of itself throughout the galaxy. Ventus is an epic journey across a planet with two mysteries: why have the winds fallen silent? And is Armiger, or Jordan, carrying a resurrection seed?
(13684 views)