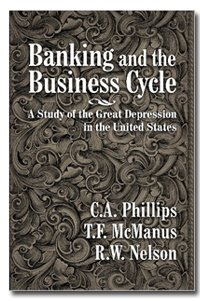 Banking and the Business Cycle
by C. A. Phillips

Description:
This rare study by C.A. Phillips, together with T.F. McManus and R.W. Nelson, appeared in 1937 as an Austrian-style analysis of the stock market crash and the great depression that followed. It explores the many theories tossed about at the time, and concludes that the theory "here developed may be called a 'central banking' explanation of the depression. The depth and duration of the depression are held to be the ineluctable consequences of the preceding boom.

Basics for Bank Directors
by Forest E. Myers - Federal Reserve Bank of Kansas City
The goal of this book is to provide directors, especially non-management directors who may have little knowledge about banks and their operation, with basic information to help them be intelligent questioners of risk taking and risk management.
(18963 views)

What Has Government Done to Our Money?
by Murray N. Rothbard - Ludwig von Mises Institute
Rothbard's famous monetary essay has influenced two generations of economists and business professionals. After presenting the basics of money and banking theory, the author traces the decline of the dollar from the 18th century to the present.
(14725 views)

Verdict on the Crash: Causes and Policy Implications
by Philip Booth, at al. - Institute of Economic Affairs
This book challenges the myth that the recent banking crisis was caused by insufficient statutory regulation of financial markets. The authors propose regulatory tools that are designed to target particular weaknesses in a banking system.
(12498 views)

The Case Against the Fed
by Murray N. Rothbard - Ludwig Von Mises Institute
The author presents the most powerful case against the American central bank ever written. This work begins with a mini-treatment of money and banking theory, and then plunges right in with the real history of the Federal Reserve System.
(12826 views)