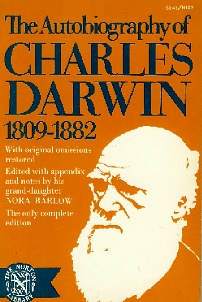 Description:
Begun in 1876 and published posthumously in 1887, The Autobiography of Charles Darwin contains the life and experiences of the man, not only in his own words, but also in the words of his son, Sir Francis Darwin. "My father's autobiographical recollections, given in the present chapter, were written for his children,--and written without any thought that they would ever be published. To many this may seem an impossibility; but those who knew my father will understand how it was not only possible, but natural.

Great Astronomers
by Robert S. Ball - Isbister
This work enlists the services of men who worked in the field of Astronomy. Robert Stawell Ball has chronicled the lives of all great astronomers and provided glimpses of their personal lives as well as their interests and their era.
(11515 views)

Lord Kelvin
by Andrew Gray - J. M. Dent & Co.
The aim of the volume is to give an account of Lord Kelvin's life of scientific activity, and to explain to the student, and to the general reader who takes an interest in physical science and its applications, the nature of his discoveries.
(8401 views)

Archimedes
by Thomas Little Heath
History and tradition know Archimedes almost exclusively as the inventor of a number of ingenious mechanical appliances. Few have any acquaintance with the details of the original discoveries in mathematics of the greatest mathematician of antiquity.
(7035 views)

Thomas Edison: A Life From Beginning to End
- Hourly History
Thomas Edison passed on many decades ago, but his inventions still echo through time. If you watch TV, listen to your favorite songs, or simply click on the lamp next to your bed, it was Edison who brought all of these innovations into the world.
(3967 views)