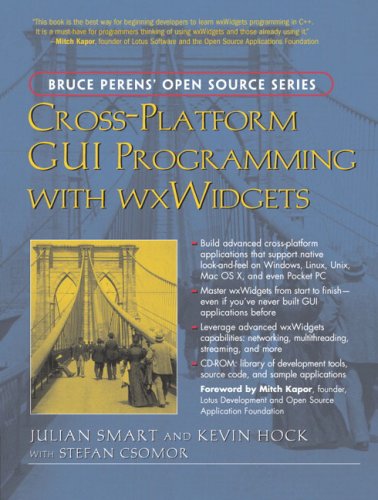 Description:
wxWidgets is an easy-to-use, open source C++ API for writing GUI applications that run on Windows, Linux, Unix, Mac OS X, and even Pocket PC, supporting each platform's native look and feel with virtually no additional coding. Now, its creator and two leading developers teach you all you need to know to write robust cross-platform software with wxWidgets. This book covers everything from dialog boxes to drag-and-drop, from networking to multithreading. It includes all the tools and code you need to get great results, fast. From AMD to AOL, Lockheed Martin to Xerox, world-class developers are using wxWidgets to save money, increase efficiency, and reach new markets. With this book, you can, too.

Simulating Humans: Computer Graphics Animation and Control
by N. I. Badler, C. B. Phillips, B. L. Webber - Oxford University Press, USA
This volume presents the problem of providing a surrogate or synthetic human for designers and engineers. The book is intended for engineers interested in understanding how a computer surrogate human can augment their analyses of designed environments.
(22382 views)

PNG: The Definitive Guide
by Greg Roelofs - O'Reilly
PNG, the Portable Network Graphics image format, is one little piece of the puzzle. This book makes PNG less puzzling by explaining the motivations behind PNG's creation, the ways in which it can be used, and the tools that can manipulate it.
(15162 views)