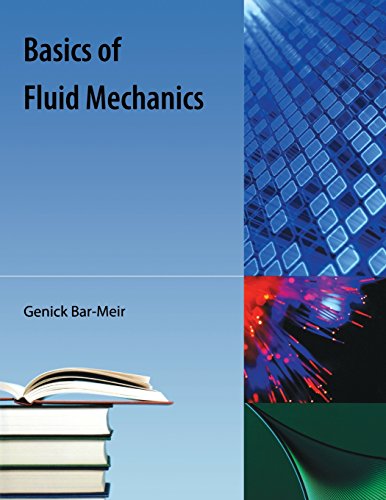 Description:
This book, Basics of Fluid Mechanics, describes the fundamentals of fluid mechanics phenomena for engineers and others. This book is designed to replace all introductory textbook(s) or instructor’s notes for the fluid mechanics in undergraduate classes for engineering/science students but also for technical peoples. It is hoped that the book could be used as a reference book for people who have at least some basics knowledge of science areas such as calculus, physics, etc.

Water Waves: The Mathematical Theory With Applications
by J. J. Stoker - Interscience Publishers
Offers an integrated account of the mathematical hypothesis of wave motion in liquids with a free surface, subjected to gravitational and other forces. Uses both potential and linear wave equation theories, together with applications.
(13621 views)

Fundamentals of Compressible Fluid Mechanics
by Genick Bar–Meir
This book describes the fundamentals of compressible flow phenomena for engineers and others. It can be used as a reference book for people who have some knowledge of the basics of fundamental fluid mechanics, calculus, and physics.
(16755 views)

Fundamentals of Multiphase Flow
by Christopher E. Brennen - Cambridge University Press
The book for graduate students and researchers at the cutting edge of investigations into the fundamental nature of multiphase flows. It is intended as a reference book for the basic methods used in the treatment of multiphase flows.
(16735 views)

Why the Boundary of a Round Drop Becomes a Curve of Order Four
by A. N. Varchenko, P. I. Etingof - American Mathematical Society
This book concerns the problem of evolution of a round oil spot surrounded by water when oil is extracted from a well inside the spot. It turns out that the boundary of the spot remains an algebraic curve of degree four in the course of evolution.
(16116 views)