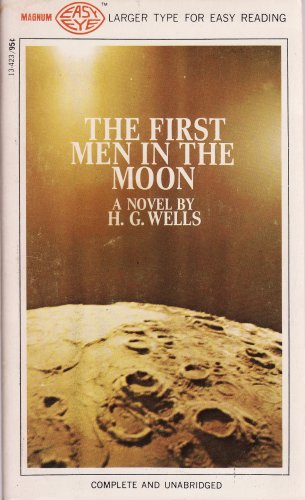 The First Men in the Moon
by H. G. Wells

Description:
H. G. Wells' THE FIRST MEN IN THE MOON, first published in 1901, describes a thrilling voyage and a moon of his own splendid imagination. It is a beautiful land, alive with vegetation. There are mooncalves on it, and then, as his intrepid explorers push on, even stranger creatures who threaten and terrify them and fill their days with adventure.

Russia in the Shadows
by H. G. Wells - Hodder and Stoughton
The book depicts the grim situation of Russia during the civil war. On his trip Wells met many people and came away from this experience pessimistic about the future of Russia, noting that it was slipping into anarchy and even greater backwardness.
(9042 views)

The Door in the Wall, and other stories
by H. G. Wells
The story of a promising public figure used up by his job and obsessed by a vision of an enchanted garden he had known as a child. It is a tale of the attempt to recover a period when our lives were simpler and complications lay far in the future.
(12441 views)

Men Like Gods
by H. G. Wells - Cassell & Co.
Science fiction novel featuring a utopian parallel universe. It is about a group of people who are drawn into an alternate dimension, which turns out to be a paradisiacal version of Earth thousands of years in ahead of contemporary society.
(11642 views)