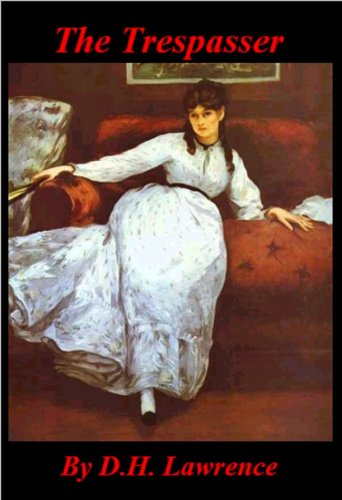 The Trespasser
by D. H. Lawrence

Description:
"The Trespasser" is the second novel written by D. H. Lawrence. Originally it was entitled the "Saga of Siegmund" and drew upon the experiences of a friend of Lawrence, Helen Corke, and her adulterous relationship with a married man. Lawrence worked from Corke's diary, with Helen's permission.

Women in Love
by D. H. Lawrence - Thomas Seltzer
The novel examines the ill effects of industrialization on the human psyche, resolving that individual and collective rebirth is possible only through human intensity and passion. Lawrence compels us to admit that we live less finely than we should.
(11872 views)

Sons and Lovers
by D. H. Lawrence - The Viking Press
The story is set in the coalfields of the author's youth, it follows a boy's growth into manhood in a working-class family. Paul Morel is a young artist torn between desire for two young beauties and affection for his mother.
(13523 views)

Twilight in Italy
by D. H. Lawrence - Duckworth and Co.
A brilliantly written travelogue. Lawrence embarked South, to Italy on foot with his German wife Frieda, and has described all his thrilling and interesting experiences. Leaving out the famous and the historical, he visits the suburbs...
(4719 views)

Kangaroo
by D. H. Lawrence - Martin Secker
Writer Richard Somers and his wife Harriet leave Europe in the hope of rebuilding their marriage in a new and freer world. In Australia they meet Kangaroo, the influential and charismatic leader of a secret fascist army called the Diggers.
(7266 views)