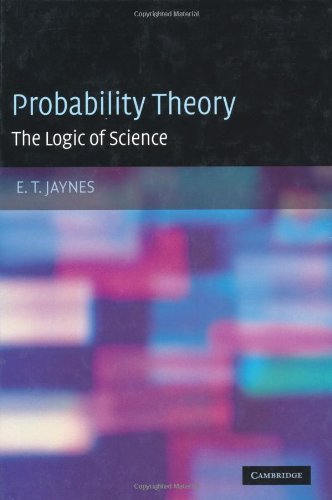 Probability Theory: The Logic of Science
by E. T. Jaynes

Description:
The book is addressed to readers who are already familiar with applied mathematics at the advanced undergraduate level or preferably higher. The text is concerned with probability theory and all of its conventional mathematics, but now viewed in a wider context than that of the standard textbooks.

Probability and Theory of Errors
by Robert Simpson Woodward - J. Wiley & Sons
The theory of probability and the theory of errors now constitute a formidable body of knowledge of great mathematical interest and of great practical importance. Their range of applicability extends to all of the sciences ...
(4385 views)

Probability: Theory and Examples
by Rick Durrett - Cambridge University Press
An introduction to probability theory covering laws of large numbers, central limit theorems, random walks, martingales, Markov chains, ergodic theorems, and Brownian motion. It concentrates on the results that are the most useful for applications.
(12978 views)

Probability, Random Processes, and Ergodic Properties
by Robert M. Gray - Springer
A self-contained treatment of the theory of probability, random processes. It is intended to lay theoretical foundations for measure and integration theory, and to develop the long term time average behavior of measurements made on random processes.
(12785 views)