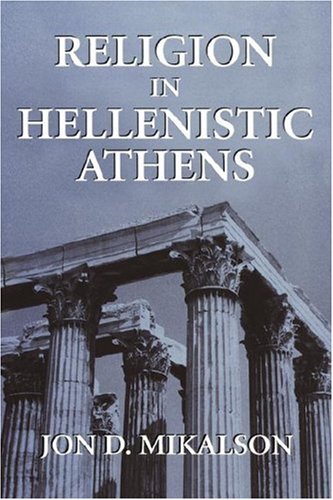 Description:
Mikalson provides a chronological approach to religion in Hellenistic Athens, disproving the widely held belief that Hellenistic religion during this period represented a decline from the classical era. Drawing from epigraphical, historical, literary, and archaeological sources, Mikalson traces the religious cults and beliefs of Athenians from the battle of Chaeroneia in 338 B.C. to the devastation of Athens by Sulla in 86 B.C., demonstrating that traditional religion played a central and vital role in Athenian private, social, and political life.

Alexander the Great
by Jacob Abbott - Harper & Brothers
Alexander the Great created one of the largest empires in ancient history. The cultural impact of his conquests lasted for centuries. Alexander is is remembered for his tactical ability and for spreading Greek civilization into the East.
(13898 views)

Hellenistic History and Culture
by Peter Green - University of California Press
History, like Herakleitos' river, never stands still. This collection of essays shares a collective sense of discovery and a sparking of new ideas -- it is a welcome beginning to the reexploration of a fascinatingly complex age.
(11675 views)

The History
by Herodotus - J. M. Dent
Combining his interests and curiosity about the customs and workings of humankind, the 'Father of History' gives us an unforgettable account of the great clash between Greece and the Persian Empire. A matchless study of persons, places, and events.
(13922 views)