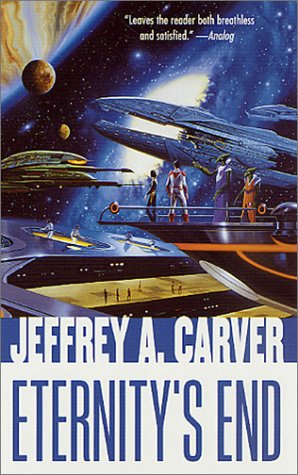 Eternity's End
by Jeffrey A. Carver

Description:
Renwald Legroeder, escaped prisoner and star rigger pilot, has seen what the government doesn't want anyone to see. This book is a fast-moving high-space epic of complex intrigue, desperate action, and romantic love, set in a daringly imagined far-future universe.

The Test Colony
by Winston K. Marks - If Worlds of Science Fiction
As official recorder, I was trying to think of words suitable to capture the magnificence, the sheer loveliness of the planet which would be our home for at least four years, perhaps forever. Benson did his best to keep his colony from going native.
(3801 views)

Binary
by Jay Caselberg - ManyBooks
From Jay Caselberg, an Australian science fiction author, this book tells the story of rival families struggle for supremacy in a binary star system. The characters are described in great detail and the book is very well-written overall.
(9460 views)

Pioneers of the Stars
by Cody Sherer - Smashwords
This fun-filled and action oriented Science Fiction adventure introduces you to the world of George Jackson. On the run from the Alliance, George does what he can to hide, but his cover is ultimately blown by Alliance Bounty Hunters...
(6189 views)