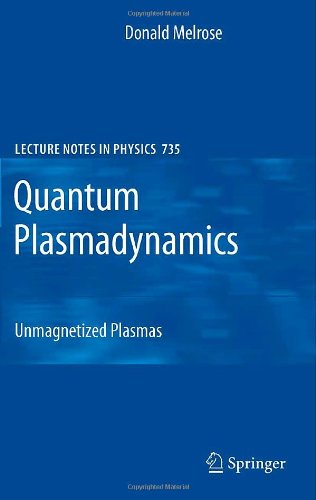 Quantum Plasmdynamics
by Donald B. Melrose

Plasmonics
by Tatjana Gric (ed.) - InTech
Plasmonics gives designers an overview of phenomena enabled by artificially designed metamaterials and their application for plasmonic devices. The purpose of this book is to provide a detailed introduction to the basic modeling approaches.
(2453 views)

Fundamentals of Plasma Physics
by James D. Callen - University of Wisconsin,
The book presents the fundamentals and applications of plasma physics. The emphasis is on high-temperature plasma physics in which the plasma is nearly fully ionized. The level is suitable for senior undergraduates, graduates and researchers.
(12933 views)

Introduction to Plasma Physics
by I. H. Hutchinson - MIT
The course is intended only as a first plasma physics course, but includes the critical concepts needed for a foundation for further study. A solid undergraduate background in classical physics and electromagnetic theory are prerequisites.
(4472 views)

Theory of Fast Electron Transport for Fast Ignition
by A.P.L. Robinson, et al. - arXiv
We review progress in the theory and simulation of fast electron transport in the context of Fast Ignition. Important aspects of the basic plasma physics, descriptions of the numerical methods, a review of ignition-scale simulations are included.
(6085 views)