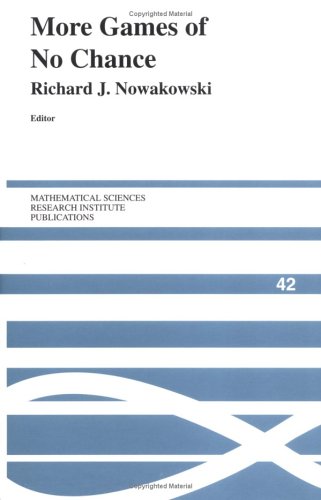 More Games of No Chance
by Richard J. Nowakowski

Description:
This book is a state-of-the-art look at combinatorial games, that is, games not involving chance or hidden information. It contains articles by some of the foremost researchers and pioneers of combinatorial game theory. The articles run the gamut from new theoretical approaches to the very latest in some of the hottest games.

The Compleat Strategyst: Being a Primer on the Theory of Games of Strategy
by John D. Williams - RAND Corporation
When this book was originally published in 1954, game theory was an esoteric and mysterious subject. Its popularity today can be traced at least in part to this book, which popularized the subject for amateurs and professionals throughout the world.
(15888 views)

Logic and the Foundations of Game and Decision Theory
by Giacomo Bonanno, et al. - Amsterdam University Press
LOFT is a key venue for presenting research at the intersection of logic, economics and computer science, and the present collection gives a lively view of an exciting and rapidly growing area. This volume collects papers presented at the Conference.
(5275 views)