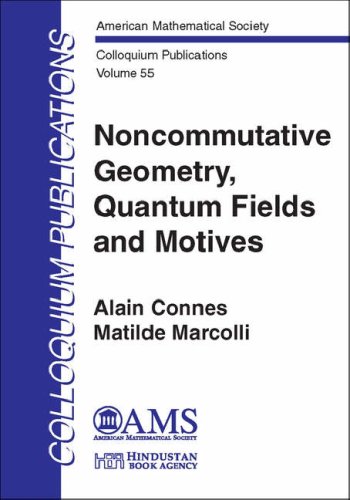 Description:
The unifying theme of this book is the interplay among noncommutative geometry, physics, and number theory. The two main objects of investigation are spaces where both the noncommutative and the motivic aspects come to play a role: space-time, where the guiding principle is the problem of developing a quantum theory of gravity, and the space of primes, where one can regard the Riemann Hypothesis as a long-standing problem motivating the development of new geometric tools.

An Introduction to Noncommutative Spaces and their Geometry
by Giovanni Landi - arXiv
These lectures notes are an introduction for physicists to several ideas and applications of noncommutative geometry. The necessary mathematical tools are presented in a way which we feel should be accessible to physicists.
(9847 views)

Edinburgh Lectures on Geometry, Analysis and Physics
by Michael Atiyah - arXiv
These notes are based on a set of six lectures that the author gave in Edinburgh and they cover some topics in the interface between Geometry and Physics. They involve some unsolved problems and they may stimulate readers to investigate them.
(7139 views)

Topology and Physics: A Historical Essay
by C. Nash - arXiv
In this essay we wish to embark on the telling of a story which, almost certainly, stands only at its beginning. We shall discuss the links and the interaction between one very old subject, physics, and a much newer one, topology.
(10771 views)