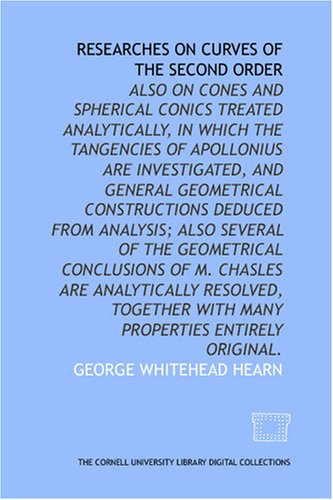 Researches on Curves of the Second Order
by George Whitehead Hearn

Description:
Researches on curves of the second order, also on cones and spherical conics treated analytically, in which the tangencies of Apollonius are investigated, and general geometrical constructions deduced from analysis; also several of the geometrical conclusions of M. Chasles are analytically resolved, together with many properties entirely original.

The Foundations of Geometry
by David Hilbert - Project Gutenberg
Axioms were uncovered in Euclid's geometry. These discoveries were organized into a more rigorous axiomatic system by David Hilbert in his Grundlagen der Geometrie (1899) which contained his definitive set of axioms for Euclidean geometry.
(15886 views)