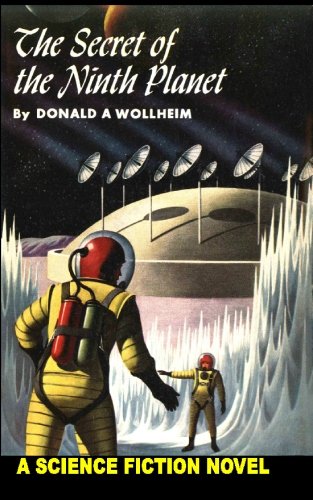 The Secret of the Ninth Planet
by Donald Allen Wollheim

Description:
On the day that the theft of the solar system's light begins, Burl Denning is with an archaeological expedition in the Andes. Within hours the U.S. Air Force has ordered the expedition to investigate the strange phenomenon that is causing a dimness and a drop in temperature throughout the world. This is the start of a fantastic adventure that takes Burl on the first circumnavigation of the solar system on the Magellan.

Star Dragon
by Mike Brotherton - Tor Books
A probe launched in the late twenty-first century to the dwarf nova SS Cygni has sent back hours of video, including a few minutes that show a serpentine form not only twisting lazily but also turning in a purposive way suggestive of intelligence.
(5608 views)

Pioneers of the Stars
by Cody Sherer - Smashwords
This fun-filled and action oriented Science Fiction adventure introduces you to the world of George Jackson. On the run from the Alliance, George does what he can to hide, but his cover is ultimately blown by Alliance Bounty Hunters...
(5554 views)

Deep Space Dead
by Edward Chilvers - Smashwords
Many thousands of years into the future the human race reigns supreme over the galaxy, its colonial starships travelling vast distances to settle new worlds in the furthest star systems. A group of space colonists are trapped on a distant planet ...
(4724 views)