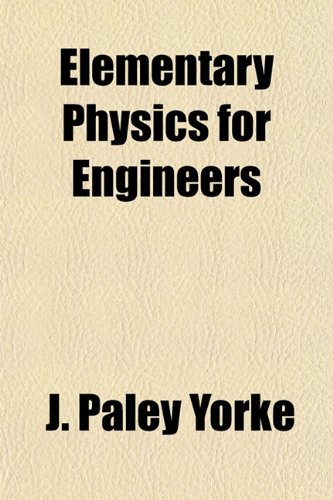 Description:
An elementary textbook for first year students taking an engineering course in a technical institution. The author has attempted to present some essential facts of elementary physics as briefly and straightforwardly as possible without any pedantry or insistence upon details of no practical importance.

Worked Examples from Introductory Physics
by David Murdock - TTU
Physics is learned through problem-solving. This book is a set of example problems typical of those given in non-calculus physics courses solved and explained. This text is here to help you with the physics course you're taking.
(7358 views)

An Introduction to Physics
by P.J. Haler - Library Press
In the following pages a scheme of the subject is developed, which forms a two-year course when two or three hours a week are devoted to the subject. The portions of Physics usually treated under Applied Mechanics and Electricity have been omitted.
(8191 views)

Light and Matter
by Benjamin Crowell
This is a textbook intended for a one-year introductory course. Algebra and trig are used, and there are optional calculus-based sections. Topics covered: Newtonian physics, conservation laws, vibrations and waves, electricity and magnetism, optics.
(8737 views)