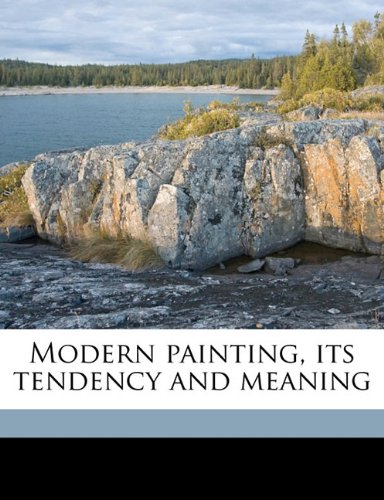 Description:
This book inquires first into the function and psychology of all great art, and endeavours to define those elements which make for genuine worth in painting. Next it attempts to explain both the basic and superficial differences between ancient and modern art and to point out, as minutely as space will permit, the superiority of the new methods over the old.

Line and Form
by Walter Crane - G. Bell & Sons, Ltd.
The substance of the following chapters on Line and Form originally formed a series of lectures delivered to the students of the Manchester Municipal School of Art. There is no pretension to an exhaustive treatment of a subject.
(15002 views)

Van Gogh and Expressionism
by Maurice Tuchman - Solomon R. Guggenheim Foundation
An attempt to illustrate Vincent Van Gogh's influence on subsequent art movements. In lieu of discussing which artists exerted an influence on Van Gogh, Tuchman discusses how Van Gogh was a model for the modern Expressionists of the 21st century.
(8466 views)

Titian
by S. L. Bensusan - T.C. & E.C. Jack
Titian was one of the most versatile of Italian painters, equally adept with portraits, landscape backgrounds, and mythological and religious subjects. His painting methods would exercise a profound influence on future generations of Western art.
(6560 views)