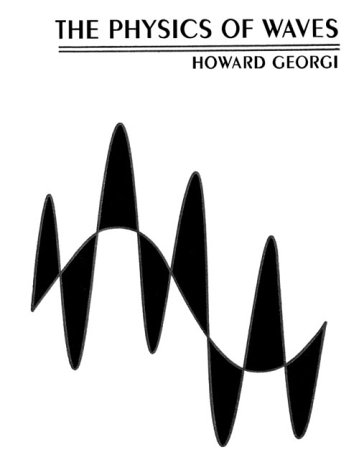 The Physics of Waves
by Howard Georgi

Water Waves: The Mathematical Theory With Applications
by J. J. Stoker - Interscience Publishers
Offers an integrated account of the mathematical hypothesis of wave motion in liquids with a free surface, subjected to gravitational and other forces. Uses both potential and linear wave equation theories, together with applications.
(10954 views)

Surface Waves
by John V. Wehausen, Edmund V. Laitone - Springer
Since its first publication this article has been an inspirational resource for students and researchers in the various fields of science and engineering. This may be attributed to its encyclopedic scope and to the scholarly efforts of the authors.
(9625 views)

Waves
- Wikibooks
The wave is a physical phenomenon that is found in a variety of contexts. The purpose of this text is to describe the kinematics of waves, i.e., to provide tools for describing the form and motion of all waves irrespective of their mechanisms.
(7537 views)

Waves
by C. A. Coulson - Oliver And Boyd
The object of this book is to consider from an elementary standpoint as many different types of wave motion as possible. In almost every case the fundamental problem is the same, since it consists in solving the standard equation of wave motion.
(10110 views)