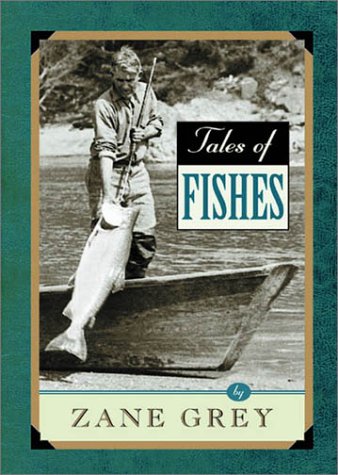 Tales of Fishes
by Zane Grey

Description:
Zane Grey is best known as fishing writer for the wild adventures of catching world record giants in the oceans around the world. He published collections of stories about particular places and species of fish. Tales of Fishes is a wonderful collection of stories that range over the most sought after species of salt water fishing-tarpon, bonefish, sailfish, marlin, swordfish, and tuna. It's a perfect sampler to whet the appetite of every armchair angler.

Hunting the Grisly and Other Sketches
by Theodore Roosevelt - Current Literature Pub. Co.
This book captures the thrill of the chase as the author recounts his North-American hunting adventures. This is a celebration of the great outdoors, a handbook on hunting, and a socio-historical record of the United States in the nineteenth century.
(10546 views)

Fly Fishing in Wonderland
by Klahowya - O. P. Barnes
This little book has to do with the streams and the trout therein of that portion of our country extending southward from the southern boundary of Montana to the Teton mountains, and eastward from the eastern boundary of Idaho to the Absaroka range.
(9000 views)

The Man-Eaters of Tsavo
by J. H. Patterson - Macmillan and co
The book details the author's adventures in East Africa at the turn of the century. His story is riveting: Petterson single-handedly tracked and killed the lions that devoured 28 of his Indian workers as well as countless African natives.
(17036 views)

Red Palmer: A Practical Treatise on Fly Fishing
by James Tayler - Empire Printing and Publishing Co.
Having read papers on Fly-fishing before the Gresham and Islington Angling Societies, and contributed occasional articles to the fishing periodicals, I have been persuaded by the members of those societies to publish my ideas on the subject...
(7072 views)