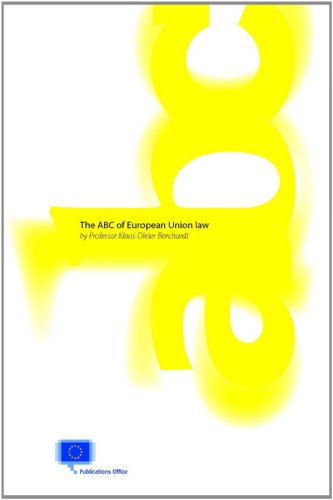 The ABC of European Union Law
by Klaus-Dieter Borchardt

Description:
The ABC of European Union law by Klaus-Dieter Borchardt examines the roots of the European project and its development as a legal order, and is a definitive reference work on the subject. The author offers insight into how the European Union is built, its broad principles and the legal order underpinning it, looking at this in relation to the national laws of the Member States.

Introducing a European Legal Order
by Gordon Slynn - Sweet & Maxwell
The author draws on his experience to provide an examination of the central role played by the European Court in bringing the European Single Market into being. The text discusses how the Single Market affects people and adapts to change.
(6000 views)

Fresh Perspectives on the 'War on Terror'
by Miriam Gani, Penelope Mathew - ANU E Press
This book engages critically with the metaphor of war in the context of terrorism. The authors write about terrorism from the perspective of international law, public and constitutional law, criminal law and criminology, and legal theory.
(12840 views)

Nuremberg: The Last Battle
by David Irving - Focal Point Publications
This book is an intimate look at the origins and conduct of the first post-war trial of major war criminals held at Nuremberg from 1945 to 1946. It has as its nucleus a series of articles which the author wrote in the late 1960s.
(13671 views)

Terrorism, the Laws of War, and the Constitution
by John Yoo - Hoover Institution Press
This volume examines three enemy combatant cases that represent the U.S. efforts to devise legal rules, consistent with constitutional principles, for waging the global war on terror. The contributors analyze the crucial questions these cases raise.
(11091 views)