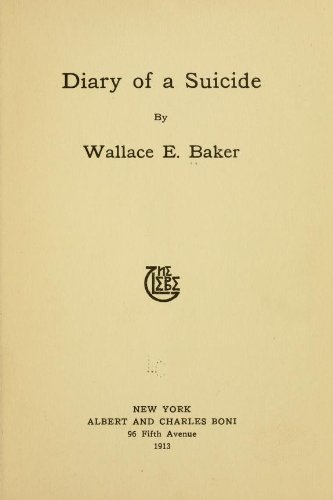 Diary of a Suicide
by Wallace E. Baker

Description:
The body of a well-dressed young man was found off Manhattan Beach, Sept. 28th. In his pockets a torn photograph of Strindberg and receipts for three registered letters were found. These receipts were traced to Mr. Herts and to friends in Toronto, one of whom identified the body on Oct. 2d as that of Wallace E. Baker.

The Whole Truth and Nothing But
by James Brough, Hedda Hopper - Doubleday & Co.
Hedda Hopper tells all, reveals the inner secrets, hidden fears, the behind-the-scene stories of Hollywood and the people who made it famous -- Hedda Hopper has known three generations of Hollywood; now she draws the curtain aside and tells it all.
(1605 views)

Darkest Peru
by Robert Cooke - Smashwords
A struggling actor embarks on an unwise adventure into the Peruvian wilderness. His need to escape 'real life' sees him negotiating the towering Andes and sprawling Amazon basin, fending for himself in a land growing more dangerous by the minute.
(5838 views)

Ten Days in a Mad-House
by Nellie Bly
The book comprised Nellie Bly's reportage for the New York World in 1887 while on an undercover assignment in which she feigned insanity to investigate reports of brutality and neglect at the Women's Lunatic Asylum on Blackwell's Island.
(12018 views)

Life of Beethoven
by Anton Schindler - Henry Colburn Pub.
The life of Beethoven, including his correspondence with his friends, numerous characteristic traits, and remarks on his musical works. The work was first published in 1840 and had a great deal of influence on later Beethoven biography.
(9579 views)