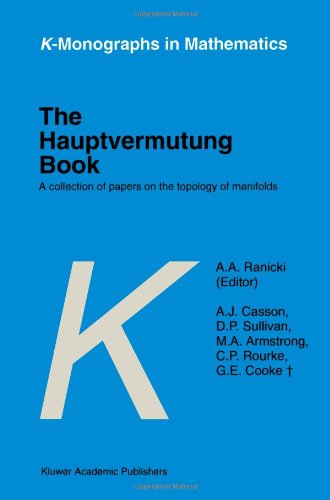 The Hauptvermutung Book: A Collection of Papers on the Topology of Manifolds
by A.A. Ranicki, et al,

Description:
The Hauptvermutung is the conjecture that any two triangulations of a polyhedron are combinatorially equivalent. This conjecture was formulated at the turn of the century, and until its resolution was a central problem of topology. Initially, it was verified for low-dimensional polyhedra, and it might have been expected that further development of high-dimensional topology would lead to a verification in all dimensions.

Exotic Homology Manifolds
by Frank Quinn, Andrew Ranicki
Homology manifolds were developed in the 20th century to give a precise setting for Poincare's ideas on duality. They are investigated using algebraic and geometric methods. This volume is the proceedings of a workshop held in 2003.
(7925 views)

A Geometric Approach to Differential Forms
by David Bachman - arXiv
This is a textbook on differential forms. The primary target audience is sophomore level undergraduates enrolled in a course in vector calculus. Later chapters will be of interest to advanced undergraduate and beginning graduate students.
(13958 views)

An Introduction to Algebraic Surgery
by Andrew Ranicki - arXiv
Browder-Novikov-Sullivan-Wall surgery theory investigates the homotopy types of manifolds, using a combination of algebra and topology. It is the aim of these notes to provide an introduction to the more algebraic aspects of the theory.
(9456 views)