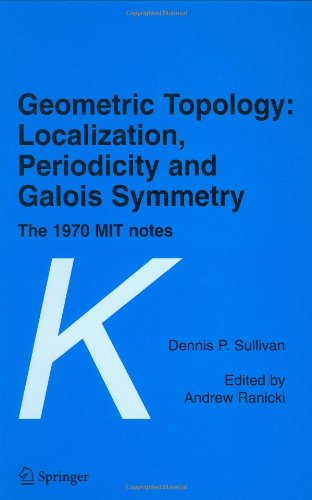 Description:
In 1970, Sullivan circulated a set of notes introducing localization and completion of topological spaces to homotopy theory, and other important concepts that have had a major influence on the development of topology. The notes remain worth reading for the boldness of their ideas, the clear mastery of available structure they command, and the fresh picture they provide for geometric topology.

Lectures on Polyhedral Topology
by John R. Stallings - Tata Institute of Fundamental Research
These notes contain: The elementary theory of finite polyhedra in real vector spaces; A theory of 'general position' (approximation of maps), based on 'non-degeneracy'. A theory of 'regular neighbourhoods' in arbitrary polyhedra; etc.
(8081 views)

Exotic Homology Manifolds
by Frank Quinn, Andrew Ranicki
Homology manifolds were developed in the 20th century to give a precise setting for Poincare's ideas on duality. They are investigated using algebraic and geometric methods. This volume is the proceedings of a workshop held in 2003.
(8210 views)

Algebraic L-theory and Topological Manifolds
by A. A. Ranicki - Cambridge University Press
Assuming no previous acquaintance with surgery theory and justifying all the algebraic concepts used by their relevance to topology, Dr Ranicki explains the applications of quadratic forms to the classification of topological manifolds.
(8561 views)

Foliations and the Geometry of 3-manifolds
by Danny Calegari - Oxford University Press
The book gives an exposition of the 'pseudo-Anosov' theory of foliations of 3-manifolds. This theory generalizes Thurston's theory of surface automorphisms, and reveals an intimate connection between dynamics, geometry and topology in 3 dimensions.
(11196 views)