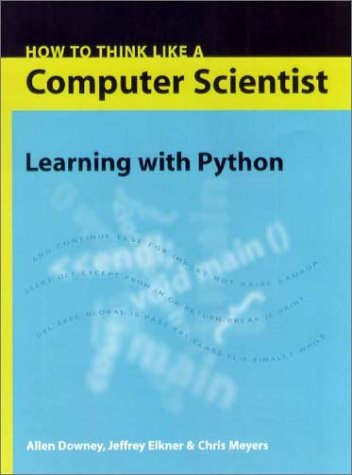 How to Think Like a Computer Scientist: Learning with Python
by Jeffrey Elkner, Allen B. Downey, Chris Meyers

Description:
This is an introduction to computer science using the Python programming language. It covers the basics of computer programming, including variables and values, functions, conditionals and control flow, program development and debugging. Later chapters cover basic algorithms and data structures.

Python course in Bioinformatics
by Katja Schuerer, Catherine Letondal - Pasteur Institute
This course is designed for biologists who already have some programming knowledge in other languages. The focus is on biological examples that are used throughout the course, as well as the suggested exercises drawn from the field of biology.
(21690 views)

How to Make Mistakes in Python
by Mike Pirnat - O'Reilly Media
Even the best programmers make mistakes, some are simple and silly, others embarrassing and downright costly. In this book, Mike Pirnat dissects some of his most memorable blunders, peeling them back layer-by-layer to reveal just what went wrong.
(6243 views)

Making Games with Python and Pygame
by Al Sweigart
This is a programming book that covers the Pygame game library for the Python programming language. Each chapter gives you the complete source code for a new game and teaches the important programming concepts from these examples.
(19838 views)

A Byte of Python (for Python 3.0)
by Swaroop C H
This is a tutorial and a guide on Python programming for absolute beginners. If all you know about computers is how to save text files, then this is the book for you. The book is updated for the upcoming Python 3.0 language.
(34794 views)