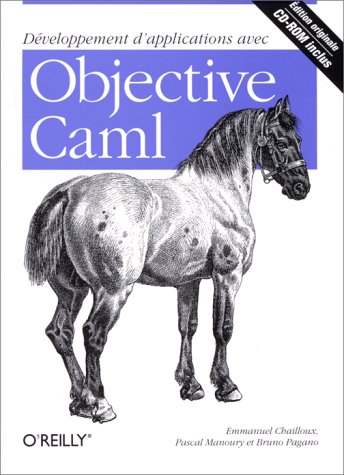 Description:
Developing Applications with Objective Caml is a preliminary english translation of a comprehensive book on OCaml, covering not only the core language, but also modules, objects and classes, threads and systems programming, and interoperability with C.

Using, Understanding, and Unraveling The OCaml Language
by Didier Rémy - INRIA Paris-Rocquencourt
These notes are addressed to a wide audience of people interested in modern programming languages in general, ML-like languages in particular, or simply in OCaml, whether they are programmers or language designers, beginners or knowledgeable readers.
(9802 views)

Unix System Programming in OCaml
by Xavier Leroy, Didier Remy
This document is an introductory course on Unix system programming, with an emphasis on communications between processes. The main novelty of this work is the use of the OCaml language, a dialect of the ML language, instead of the C language.
(10192 views)

Introduction to Objective Caml
by Jason Hickey - Caltech
OCaml is a high-performance dialect of ML. This book presents a practical introduction and guide to the language, with topics ranging from how to write a program to the concepts and conventions that affect how programs are developed in OCaml.
(9312 views)