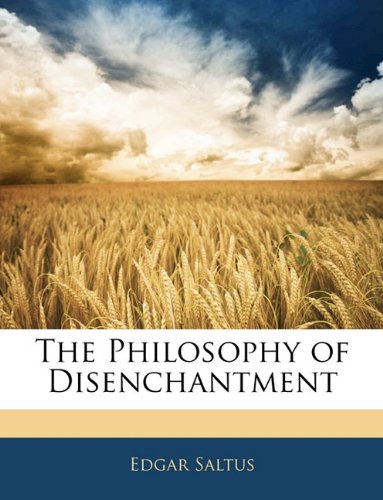 The Philosophy of Disenchantment
by Edgar Saltus

Description:
This book is a refreshing, unique look at the nature of life, told from a Schopenhauerian perspective. Saltus, having drawn from sources as diverse as Voltaire and the Bible, makes the point that this is far from being the 'best of all possible worlds.' Rather, life is, in Saltus' estimation, a grievous burden to be borne.

Modern Philosophy
by Walter Ott, Alex Dunn - BCcampus
This is a textbook in modern philosophy. It combines readings from primary sources with two pedagogical tools. Paragraphs in italics introduce figures and texts. Numbered study questions ask students to reconstruct an argument from the text.
(4533 views)

The New Organon
by Francis Bacon - Collier
This work was revolutionary in its attempt to give formal philosophical shape to emerging experimental science. It challenged the entire edifice of the philosophy of Bacon's time, and left its mark on all subsequent discussions of scientific method.
(10420 views)