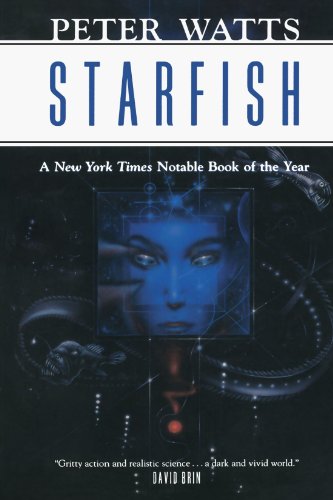 Description:
Peter Watts's first novel explores the last mysterious place on earth--the floor of a deep sea rift. Channer Vent is a zone of freezing darkness that belongs to shellfish the size of boulders and crimson worms three meters long. It's the temporary home of the maintenance crew of a geothermal energy plant--a crew made up of the damaged and dysfunctional flotsam of an overpopulated near-future earth.

Dreams Must Die: A Fable of the Far Future
by J.M. Porup - unglue.it
Jimmy Shade kills dreams. It's his job. As a member of the elite Dream Police, he defends the Collective against that poisonous nocturnal ooze. But when Shade gets infected with a dream, he finds himself on the run from his former colleagues.
(3561 views)

Simon of Space
by Chester Burton Brown - Smashwords
Intelligent, humorous and quirky science fiction. Simon remembers his birth; he was 36 years old at the time. A victim of technology and circumstance, Simon's memory has been wiped clean, leaving him to rediscover his own identity.
(7011 views)

Luminance
by Andreas Ingo
Luminance is a novel about Love Revolution: Revolution of the heart, mind and soul but also about revolution in society. It happens to be set in a parallel universe, on a world resembling a great flower. This is a world of different physical laws.
(4494 views)

The Truth Machine
by James L. Halperin
What would the world be like if scientists developed the perfect lie detector? Halperin argues that such an invention could lead humanity into an era of unequaled prosperity, one in which crime is virtually unknown and true democracy is possible.
(10052 views)