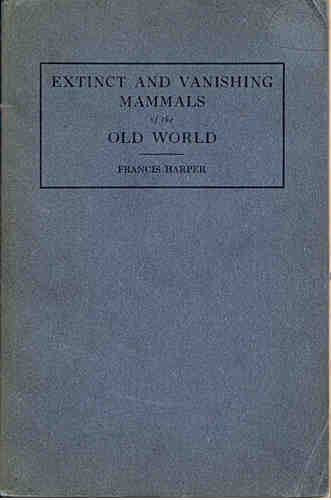 Extinct and Vanishing Animals of The Old World
by Francis Harper

Description:
The present work had its origin in a strongly felt need for definite information on the mammals that have become extinct during the Christian Era, on those that are now threatened with the same fate, on the factors contributing to the progressive depletion of the world's mammalian faunas, and on the measures that have been hitherto or may be hereafter undertaken for their preservation. It consists to a large extent of an inventory of vanishing resources, as an essential step in their conservation.

Meet the Invertebrates: Anemones, Octopuses, Spiders, Ants, and Others
by Katharine Rogers - Smashwords
The book reveals these apparently alien creatures to be fascinating animals dealing with the basic problems of living as all animals do. It explains how they work physiologically and describes their appearance, behavior, and perception of the world.
(10149 views)

Mammals of the Southwest Mountains and Mesas
by George Joyce Olin - Southwest Parks and Monuments Association
This book describes mammals of the Southwest which live in the life zones above the low desert. The book is divided into hoofed animals, rodents, and carnivores. Includes finely executed black-and-white drawings and distribution maps.
(7263 views)

Practical Zoology
by Robert William Hegner - MacMillan
The book is intended for the use of students in secondary schools. The word 'practical' has been chosen since an effort has been made to present those facts about animals which will have the most practical bearing upon the daily life of the student.
(13031 views)

The Vertebrate Skeleton
by Sidney H. Reynolds - Cambridge University Press
The author gives first an account of the skeletal characters of the group in question and of its subdivisions; secondly describes the skeleton of one or more selected types; and thirdly treats the skeleton as developed in the group organ by organ.
(7492 views)