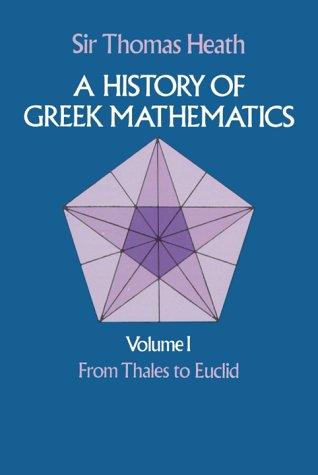 A History of Greek Mathematics
by Thomas Little Heath

Description:
The idea may seem quixotic, but it is nevertheless the author's confident hope that this book will give a fresh interest to the story of Greek mathematics in the eyes both of mathematicians and of classical scholars. Greek mathematics reveals an important aspect of the Greek genius of which the student of Greek culture is apt to lose sight.

Vedic Mathematics
by W. B. Kandasamy, F. Smarandache - Automaton
In traditional Hinduism, the Vedas are considered divine in origin and are assumed to be revelations from God. In this book the authors probe into Vedic Mathematics and explore if it is really Vedic in origin or Mathematics in content.
(15816 views)

The Pythagorean Theorem: Crown Jewel of Mathematics
by John C. Sparks - AuthorHouse
The book chronologically traces the Pythagorean theorem from the beginning, through 4000 years of Pythagorean proofs. The text presents some classic puzzles, amusements, and applications. An epilogue summarizes the importance of the theorem.
(17334 views)

A Short Account of the History of Mathematics
by W. W. Rouse Ball - Dover Publications
This is the classic resource on the history of mathematics providing a deeper understanding of the subject and how it has impacted our culture. From the early Greek influences to the middle ages and the renaissance to the end of the 19th-century.
(14901 views)