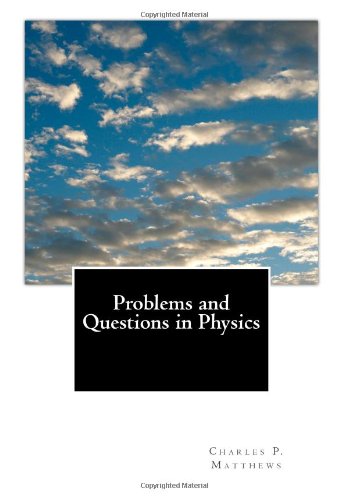 Problems and Questions in Physics
by C.P. Matthews, J.S. Shearer

Description:
A numerical example in Physics serves a manifold purpose. It takes the mathematical expression of a physical law out of the realm of mere abstraction, by emphasizing the connection between such a law and the phenomena of daily observation.

College Physics for Students of Biology and Chemistry
by Kenneth R. Koehler - Raymond Walters College
This textbook is intended as a vehicle for students in the biological and chemical sciences, enabling them to understand the physical underpinnings of their later studies. The systems under investigation will relate to human physiology.
(15986 views)

An Introduction to Physics
by P.J. Haler - Library Press
In the following pages a scheme of the subject is developed, which forms a two-year course when two or three hours a week are devoted to the subject. The portions of Physics usually treated under Applied Mechanics and Electricity have been omitted.
(9119 views)

Light and Matter
by Benjamin Crowell
This is a textbook intended for a one-year introductory course. Algebra and trig are used, and there are optional calculus-based sections. Topics covered: Newtonian physics, conservation laws, vibrations and waves, electricity and magnetism, optics.
(9691 views)