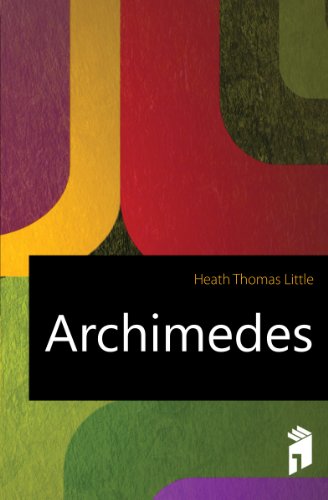 Description:
History and tradition know Archimedes almost exclusively as the inventor of a number of ingenious mechanical appliances, things which naturally appeal more to the popular imagination than the subtleties of pure mathematics.And it is to be feared that few who are not experts in the history of mathematics have any acquaintance with the details of the original discoveries in mathematics of the greatest mathematician of antiquity, perhaps the greatest mathematical genius that the world has ever seen.

A Century of Mathematics in America
by Peter Duren, Richard A. Askey - American Mathematical Society
In 100 years the American mathematical community has grown to an influential group that sets the standard for the rest of the world. This book in three volumes depicts the political and mathematical forces that have shaped the AMS in the past century.
(17958 views)

A History Of The Mathematical Theory Of Probability
by I. Todhunter - Kessinger Publishing, LLC
History of the probability theory from the time of Pascal to that of Laplace (1865). Todhunter gave a close account of the difficulties involved and the solutions offered by each investigator. His studies were thorough and fully documented.
(18205 views)

Vedic Mathematics
by W. B. Kandasamy, F. Smarandache - Automaton
In traditional Hinduism, the Vedas are considered divine in origin and are assumed to be revelations from God. In this book the authors probe into Vedic Mathematics and explore if it is really Vedic in origin or Mathematics in content.
(15828 views)