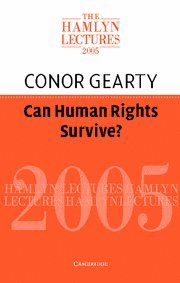 Description:
In this set of three essays, originally presented as the 2005 Hamlyn Lectures, Conor Gearty considers whether human rights can survive the challenges of the war on terror, the revival of political religion, and the steady erosion of the world's natural resources. He also looks deeper than this to consider the fundamental question: How can we tell what human rights are?

Human Rights and the Borders of Suffering
by M. Anne Brown - Manchester University Press
This book argues for greater openness in the ways we approach human rights and international rights promotion, and brings some new understanding to old debates. It casts human rights as a language for probing the political dimensions of suffering.
(4062 views)

Discrimination at Work: Comparing European, French, and American Law
by Marie Mercat-Bruns - University of California Press
Powerful and incisive, the book examines issues such as racial and religious bias, sexual harassment, gender discrimination, and equality for LGBT individuals, highlighting comparisons that will further discussions on human rights across borders.
(3497 views)

The Philosophy of Human Rights
by Gerhard Ernst, Jan-Christoph Heilinger - De Gruyter Open
The book identifies two major issues that call for conceptual clarification in order to better understand human rights claims: the question of how to justify human rights and the tension between universal normative claims and particular moralities.
(2273 views)

The Human Freedom Index
by Ian Vasquez, Tanja Porcnik - Fraser Institute
The Human Freedom Index is the most comprehensive measure of freedom ever created for a large number of countries around the globe. It captures the degree to which people are free to enjoy major liberties such as freedom of speech, religion, etc.
(3791 views)