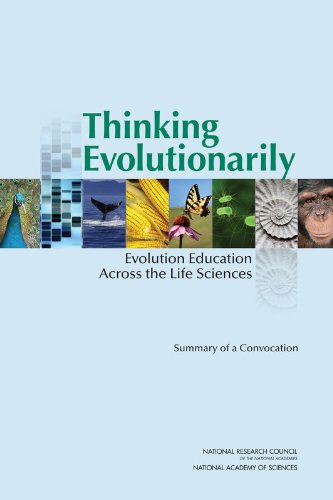 Thinking Evolutionarily: Evolution Education Across the Life Sciences
by Jay B. Labov (ed.)

Description:
Evolution is the central unifying theme of biology. Yet today, more than a century and a half after Charles Darwin proposed the idea of evolution through natural selection, the topic is often relegated to a handful of chapters in textbooks and a few class sessions in introductory biology courses, if covered at all. In recent years, a movement has been gaining momentum that is aimed at radically changing this situation.

Pioneers of Evolution from Thales to Huxley
by Edward Clodd - D. Appleton & co.
This book tells the story of the origin of the Evolution idea in Ionia, and, after long arrest, of the revival of that idea in modern times, when its profound and permanent influence on thought and on human relations and conduct, is apparent.
(5992 views)

On the Origin of Species
by Charles Darwin - P.F. Collier & son
Published amid a firestorm of controversy in 1859, this is a book that changed the world. It offers coherent views of natural selection, adaptation, the struggle for existence, and other concepts that form the foundation of evolutionary theory.
(12393 views)

The Evolution of Aging
by Theodore C. Goldsmith - Azinet LLC
This book provides a historical review of biological aging theories including underlying evolution and genetics issues and describes exciting recent discoveries and new theories that are causing renewed interest in aging-by-design.
(10932 views)

The Descent of Man
by Charles Darwin - John Murray
This landmark work on evolutionary theory marked a turning point in the history of science with its vision of human nature as the product of evolution. Darwin argued that the noblest features of humans were the result of the natural processes.
(10616 views)